Merthyr Motor Auctions (MMA) have supported many local clubs, charities and organisations, just some of the areas MMA have and still support include: 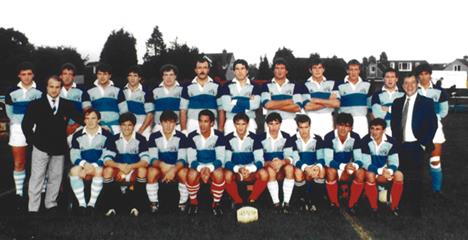 Merthyr Motor Auctions (MMA) has been able to craft an ever-growing empire selling locally, nationally and internationally to over 100 countries.

I was born and bred in Pant, Merthyr Tydfil, and began my business in Aberfan 1970.

Since then, MMA has grown into a world-class sales centre with over 3,000 Fleet vehicles and plant auctioned weekly at half the garage price. In fact MMA auction more vans / commercials than the other 600 auctions added together.

We were actually the first company in Great Britain to sponsor a football club. In 1984 MMA sponsored Cardiff City, which was in the old second division (currently called the Championship), where they played the likes of Manchester City, Leeds United, Newcastle United and many other present Premiership football clubs.

MMA also paid the salary of Gerry Francis, England captain at the time, who made his Cardiff City debut in December 1984 his salary was £450 per week.

We were also the first company to sponsor rugby in 1985, supporting Penarth and Rhigos. It managed to persuade the French Barbarians to play Penarth in 1987 to replace their Good Friday Barbarian fixture that they had just lost - because it was less fashionable than some of their other fixtures.

The likes of French try record holder Serge Blanco and most of the French international side at the time were in the French Barbarian side. This was the first time they played outside France since they were formed in 1979. It was also a great pleasure for MMA to sponsor little Rhigos, who were the lions of their division.

Along with my staff, we treat each and every customer with care and attention, and that is why they keep coming back.

The 40-strong team help customers, new and old, and guide them through the auction process.

I have even introduced 'spotters' to act as personal auction assistants for inexperienced bidders. This service is free and you can ask your spotter any questions you may have.

They will also arrange free fully comprehensive insurance for a week. This gives you time to get a competitive quote from other companies.

These spotters can help you in person, or even if you are a telephone / internet bidder.

Auctions are held in our purpose built auction house in Pant / Dowlais. We are one of the most successful auctions in Europe. There is always a great atmosphere during the auctions, people are relaxed and happy because they are helped through the process and they are not afraid to bid.

The spotters are here to guide and relax everybody.

There's Sky television and a modern cafeteria and coffee bar to keep you entertained while you wait for your chosen vehicle to be auctioned or for your documentation to be arranged. Many vehicles are under manufacturers warranty and for those that are not covered; we very often give a free mechanical warranty. The older vehicles are sold as seen, but all vehicles are company owned and most with service history. We also offer low rate finance from as little as 6.9% APR.

There are thousands of vehicles to choose from, ranging from a Mini to a Mercedes, vans / commercials of all descriptions, big or small we've got them all, from an ambulance to a fire tender, from a mobile library to a refuse vehicle, from a tanker / gulley to a sweeper and from a mower to a tractor.

MMA is one of the longest established auctions still operated by the same directors.

The author, Alan Davies, is Managing Director and co-founder of Merthyr Motor Auctions.

Our next Car & Van auctions

Our next Truck & Heavy Commercial auction

Merthyr Tydfil Car Auction Ltd T/A MMA is authorised and regulated by the Financial Conduct Authority, our registration number is 669360 and can be located on (https://register.fca.org.uk/). We can introduce you to a selected group of lenders (a list is available on request) who may be able to help you finance your next vehicle. We are only able to offer finance products from these lenders. All finance subject to status and income. Written quotations available on request. We will be paid a commission for introducing you to our selective group of lenders, this will be a percentage of the amount that you borrow or a fixed fee. If you ask us what commission we receive for your agreement with us, we will provide you with the detail in writing and in good time before the finance agreement is executed.